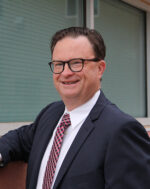 Following a successful career in business, Mr. Mitchell entered law school, intending to pursue a career in business law. However, he quickly developed a passion for litigation – a path which led him to join O’Brien and Padilla, P.C. in 2019.

Mr. Mitchell graduated with his MBA in Corporate Finance and graduated cum laude from the University of New Mexico Law School in 2014.  While in law school, he was selected for Moot Court and received Dean’s List or Honor Roll recognition every semester. Mr. Mitchell spent two years clerking for a civil litigation firm, sitting through half a dozen jury trials and writing numerous appellate briefs. Following law school, Mr. Mitchell continued in litigation, and has obtained favorable decisions in bench and jury trials and written successful appellate briefs for both the Court of Appeals and the New Mexico Supreme Court.

Mr. Mitchell is licensed in both New Mexico and Minnesota in addition to the Tenth Circuit Court of Appeals.  Mr. Mitchell was selected as a Southwest Super Lawyers Rising Star in 2019, an honor bestowed on less than 2.5 percent of all attorneys in the State of New Mexico.

He is also a member of the H. Vearle Payne American Inns of Court and serves on the Editorial Board for the New Mexico Defense Lawyers Association’s newsletter.

Away from law, Mr. Mitchell volunteers with the University of New Mexico Greek community and The Ability Experience, a nationally recognized nonprofit with numerous programs educating undergraduates and communities about the abilities of people with disabilities. Jeff was nationally recognized in 2016 as the Pi Kappa Phi Associate Chapter Advisor of the Year.

Is your Email “Reasonably Secure?  ABA Formal Opinion No. 477 and the New Fact-based Analysis to the Protection of Electronic Communications.  Defense News, Summer 2018.